This congregation had its birth during the year 1910, when a noble band of men and women, having served and worshiped with the assembly of the Church of God at 306 West 74th Street, of which Elder E.A. Reardon was pastor, were separated and found it necessary to establish a place where others could come and hear the full gospel preached uncompromisingly, free from fanaticism, regardless of race or color.

THE FIRST SITE chosen was at 2916 South Dearborn Street with Sister Lena Nelson as first pastor. Sister Nelson was the sister of Elder Emma A. Crosswhite, pastor at Washington C.H., Ohio.

Many reputable ministers from various cities visited and encouraged them in this undertaking. Among the illustrious leaders and ministers responsible for the growth of this work were Elders J.D. Smoot, who at one time served as pastor; Mary Mills, Lena Cooper, Mary E. Ashley, Pearl L.M.Hall, Elizabeth Peters and others.

THE SECOND SITE chosen was 3618 Rhodes Avenue in a basement apartment belonging to Brother and Sister Frank Cox, who were identified with this work. The Lord prospered the work and it became necessary to seek larger accommodations.

At this time, Elder Luther Hill, minister from Anniston, AL had been selected pastor and through his efforts, the congregation moved to a three story brick building at 3455 Prairie Avenue.

The first floor was a storefront and was used as the place of worship; the second floor was rented to reliable tenants, and was a source of income to the struggling work, the third floor was used as the parsonage. After some time, the building was purchased by the congregation. 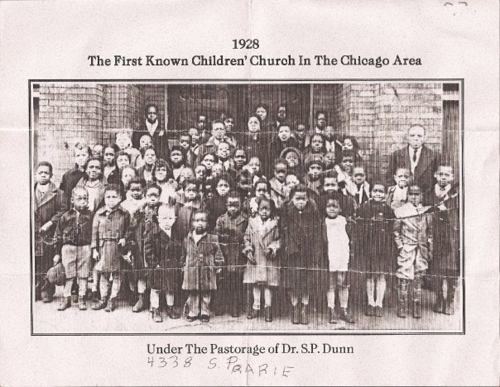 The executive ability of this able leader had asserted itself in many ways, and after four years of reconstruction and labor, the promises foreseen in the first year of this ministry found glorious fulfillment. On the first Sunday in September 1924, after amassing at a large tent pitched on the lot belonging to the church at 42nd and Champlain Ave., a successful battle against sin had been waged. Several hundred people marched to their newly acquired church home located a 4338 Prairie Avenue. It was a large, modern building where God’s people were privileged to work and worship for twenty-one years. With a larger building in a thickly populated locality, the problem of reaching millions of unchurch people in the city presented itself more forcibly. Elder Dunn organized the church membership into a group of seventeen prayer bands. This outreach ministry reached the entire city of Chicago and many lives were touched.

During the year 1927, our first church paper was edited by Sister Julia London, and assisted by Miss Rosalia Cochran. This paper was known as “The Young People’s Vision.”

The leavening force of the precious Holy Spirit continue to work among Gods people, and space became limited During the year 1929, Pastor Dunn presented plans for remodeling the church building. Remodeling plans included larger seating capacity with other conveniences. In 1930 these plans materialized in a new addition consisting of a balcony seating of 200, a well equipped library, ladies lounge, a fully equipped print shop and two adjoining modern offices. The Honorable Judge Henry Harrison officiated at the laying of the cornerstone, and Dr. John A Morrison, president of Anderson College and Theological Seminary, delivered the dedicatory sermon.

Each year brought with it highlights and points of interest. The hand of God was working through his people, for at this time, the congregation was ranking second in membership in the reformation. Because of the success of his pastoral, Anderson College and Theological Seminary conferred upon Rev. S. P. Dunn, the honorary degree of Doctor of Divinity.

In 1936, Dr. S. P. Dunn with his workers arranged a special program for the Anderson Camp Meeting. The choir under the direction of Prof. L.F. Dunn rendered special music, and the young people directed by Thomas E. Strong conducted a special young people’s service using as a subject. “Jesus Christ, the Panacea for the Worlds Ills.” This was the first time services had been arranged by the colored brethren for the International Camp Meeting at Anderson.

During the summer of 1936, for the first time in the history of the work in Chicago, the congregations of the city pitched a large tent at 69th and Green Streets, where souls were saved and miraculous healings wrought by the power of God. Some of the outstanding ministers assisting in these services were E.E. Byrum, R.C. Caudill, H.M. Riggle, M.P.Rimmer, and others. Arthur Lynn, the golden tenor heard so often at the Anderson Camp Meeting, added much to the services with his lovely singing.

The congregation observed the eighteenth anniversary of Dr. S.P. Dunn’s ministry with an impressive celebration of appreciation and acclamation Work in this particular locality was abruptly ended after twenty-one years, for on the morning of January 20, 1941, the entire building was razed by fire of undetermined origin. Despite the great loss sustained, the church records were miraculously preserved through Divine Providence, and the books containing them are still in use at the present time. This severe disaster presented a challenge to our hopes, for we were working diligently, looking forward to the time when we could be free from debt. Now, we would have to begin again, and although we were homeless, we were not hopeless nor utterly cast down for “the eternal God is thy refuge, and underneath are the everlasting arms.” Through the magnanimous spirit of the pastor and officers of the Christian Church located at 4415 Indiana Avenue, we were permitted to hold our Sunday morning service and Tuesday evening service in their church building.

Finally, after several months of incessant toil, planning, fundraising, and through the generosity of our pastor, the Lord enabled us to secure a commodious and satisfactory place of worship where we are now located. Thus it seems, our adversities and disasters seem to have proved blessings in disguise.

After the death of Dr. S.P. Dunn in 1959, the Reverend Ezekiel Jefferson Morris, Jr. became interim pastor and in 1960 he was confirmed pastor of Langley Avenue Church of God. His stature among us was that of a counselor, nurturing pastor, executive leader, as well as a beloved Christian statesman. His life enhanced the cause of Christ and he continued to “Send out the Gospel News.”

Dr. Morris’ great insight and vision was materialized through the outreach ministry as he guided the congregation to establish the First Church of God in Harvey and the E.J. Morris, Jr., Child Care Center, These ministries perpetuated the Kingdom of God. Today, souls are being saved and the Good News continues.

His outstanding ministries and achievements were recognized both locally and nationally and many awards, honors, and offices were bestowed upon him. He served sixteen years as a trustee of Anderson College and became Anderson College’s second lifetime honorary member of the Board of Trustees. In recognition of his ecumenical services to humanity, he was awarded the Doctor of Divinity degree. In 1980, he was named “Outstanding Pastor of the Year”.

Dr. Morris and congregation established a memorial on Anderson College Campus in honor of the late Dr. S.P. Dunn, who sent out the Gospel News over the airwaves.

Dr. Morris took great pride in accounting for the outstanding achievement with the joint efforts of Dr. Marcus H. Morgan, then pastor of Emerald Avenue Church of God in uniting God’s people in the Chicagoland Area Churches of God. Today, we enjoy wonderful fellowship and love with the saints.