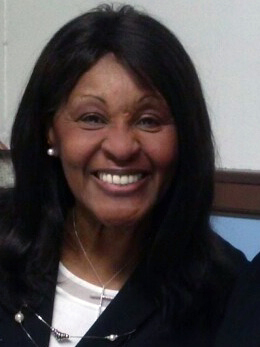 Personal Mission StatementTo remain a yielded vessel through which the love and ministry of Jesus Christ may flow at all times, in all circumstances and to all persons.

Early Years
Pastor Thomas grew up in Decatur, Illinois, where she was active in church service and ministry at an early age. She served as a Sunday School teacher at age eleven, and was the lead singer for her church’s five-member special singing group from ages twelve to fourteen. Growing up, she was blessed to be able to accompany her mother, Reverend Christine Hawkins, who was in service to The Lord on evangelistic speaking engagements from time to time; who helped to plant a church in Springfield, Illinois; and served as pastor of Williams Street Church of God in Danville, Illinois.

Education and Teaching Experience
With an interest in languages, she received a Bachelor of Arts Degree with a major in French and a minor in English from Illinois State University in Normal, Illinois. After teaching a few years, she received a Master of Arts Degree from Ball State University in Muncie, Indiana, with a double major in French and Political Science. Other courses were taken at Loyola University in Chicago, Illinois. Since teaching had always been her desired career since childhood, she was appreciative of the opportunity to teach French for a total of thirty-five years in Ft. Wayne, Indiana, Chicago, Illinois and Evanston, Illinois. While teaching, Pastor Thomas kept her knowledge of the French language alive by making summer visits to Montreal, attending graduate summer school at the University of Nancy II, in Nancy, France, and working for a winter session in a ski school in Ristolas, France, located in the French Alps.

Ministry Preparation
Witnessing the ministry of her mother as an evangelist and later, as a pastor, granted insight into the dedication required in ministry. Knowing, studying and fully embracing the Word of God remained a priority for Pastor Thomas. Her mother said to her even as a teen, ” Cynthia, you REALLY think about The Lord”, because she related so much of practical life to the scriptures. After accepting The Lord’s call upon her life for ministry, Pastor Thomas was mentored in ministry by her eldest sibling, renowned evangelist, Dr. Johnnie Mae Brown. Dr. Brown guided her in the principles of studying the Word, prayer, and allowing the Holy Spirit to guide in all areas of life. Rev. Thomas continued with spiritual development with courses of study at the Midwest School of Ministry and Theological Studies in Evanston, Illinois and Garrett Theological Seminary in Evanston, Illinois.

In 2004, Rev. Thomas became a part of the ministry team at Langley Avenue Church of God under the leadership of the Reverend Doctors Noah and Carolyn Waddy Reid, where she assisted however she was needed. Pastor Thomas has also served the National Association of the Church of God as an instructor of the In-Service Training Institute, as a member of the program committee for the summer camp meetings, as president of the women’s ministry for five years and as secretary for the Board of Directors and secretary for the General Assembly of Ministers.

Langley Avenue Church of God Installation
Upon the retirement of Rev. Dr. Noah Reid, Rev. Thomas became the Interim Pastor. She served in this capacity July 1, 2011 – October 13, 2012. She was unanimously voted upon by the congregation on October 14, 2012, to become their pastor. She was installed on November 4, 2012, by leaders who have poured encouragement into her life; Pastor Eric Livingston, Illinois State Pastor, and Bishop Timothy and Sister Clye Clarke, First Church of God, Columbus, Ohio.